The Town Board of Saguache would like to clarify some information relating to the proposed 1% sales tax increase which will be voted on at the April 5 Election.

The Trustees provided the following statement to be posted on Saguache Today:

The Proposed Sales Tax Increase on the Ballot for the April 5, 2016, election is a one-time increase.

Town Board members and staff have been getting questions about whether the sales tax increase that Saguache residents will vote on at the April 5 election is a one-time increase, or whether it will go up every year. The answer is: It is a one-time, 1 percent increase. It is expected to raise about $30,000 a year, and that money can only be used to fund law enforcement. The Town could not increase the tax amount again without going back to the voters for their approval.

As most people know, over the past months many citizens have come to the Town Board concerned about lack of law enforcement presence in town. At a special meeting held in January (READ STORY), Board members and concerned citizens alike learned from the Sheriff about how under-funded his office is. Because of citizen concerns, the Trustees voted to sign a contract with the Sheriff to fund the cost of hiring one deputy, to patrol and uphold the law in the town of Saguache. 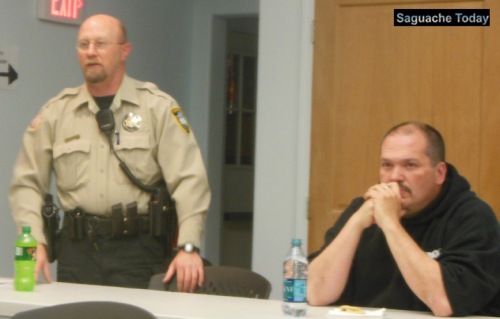 This has been good news for the crime rate in our community. However, in the long run, the current Town budget cannot stretch to keep up this funding. So the Board looked at ways to raise more money. The options were limited: Figure out if there is a way to help fund law enforcement from monthly fees paid by citizens, or look at sales tax revenue. The Board with the support from concerned citizens opted for sales tax, because a good portion of that would come from people passing through Saguache.

People have also raised concerns about the ballot language itself, saying it is not clear. Under the Taxpayers Bill of Rights (TABOR), passed by voters in 1992, ballot language has to be written in certain ways. However, the Town could have done a better job of explaining the language for voters – and for that, the Trustees apologize.

If anyone has additional questions, please contact the Saguache Town Hall. 719-655-2232.

In January, Town of Saguache Trustees and Mayor voted unanimously to bring a one percent sales tax increase to voters on the April 5 ballot to cover costs of additional law enforcement patrols in town. Photo: Saguache Today.