According to Saguache Town Clerk Rese Garcia, stated that the tax increase will go into effect on July 1, 2016.

Propelled by an increase in property-related crimes such as auto theft, local residents voted to make the long-term financial commitment for added patrols in town.

So what does that mean? Where do things go from here? According to Saguache Mayor Greg Terrell (more on that race’s results below), the Town of Saguache has committed to the additional patrols through 2016 and now voters have extended that coverage with today’s vote. 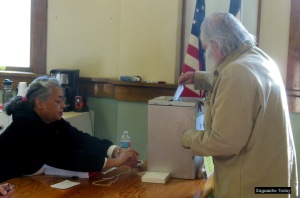 Residents may recall that the Town Board of Trustees budgeted $20,000 for law enforcement for 2016. Then, in a special session on January 21 the board voted unanimously to “dip into the reserves” for the additional $30,000 in order to come up with the $50,000 price tag Saguache County Sheriff Warwick presented as the cost for an additional officer. In February, Saguache Town officials inked the final contact with the county and additional patrols within the town limits began immediately.

“We’re looking to get law enforcement back on track,” stated Mayor Terrell referring to the financial commitment of added patrols. So residents will continue to see additional law enforcement presence and with the additional revenue, sustaining that during next fall’s budget discussions will make things a bit easier for the town board.

To that end, the following four candidates received the top votes for town board: LINK.

Amber Wilson (137 votes ), the youngest of the Trustees is a county employee at the Land Use Office.

Loren Aldrich (104 votes) – Loren Aldrich is new to the community. Previously from the small town of Vanmeter Iowa, he brings previous board experience to the table. Loren served on the Iowa State University Extension and Outreach Council in Dallas County Iowa.

Wyoma Hansen (140 votes) has been a resident of Saguache for nearly 40 years. She served as Trustee for the Town of Saguache in from 1982 – 88. Hansen is a retired Forest Service employee.

Susan Collins (141 votes) was born in Del Norte and raised on the family ranch, in the Cochetopa Valley in Saguache County. Her interests include horse shows, livestock judging and cooking.

And finally Mayor Greg Terrell will keep his position as leader of this small, rural community for another four years as voters cast 104 votes in his favorite for re-election.

“Thanks to everyone who voted,” stated Terrell. The incumbent beat out three competitors with 104 votes, challengers had the following ballot counts: Janice Torrez (58 votes) , David Chavez (15 votes) and Dwayne Jett (5 votes).

On the horizon for Terrrell and the town board are continuing efforts to address the town’s antiquated infrastructure. He believes the most pressing issue facing Saguache Today is water. Mayor Terrell and the board are currently researching to find the best possible solution in terms of cost and implementation that will insure that Saguache’s water supply will be able to meet the needs and budget of the users and fulfill the requirements of the State of Colorado. Stay Tuned!

The newly elected Mayor and Town Board Trustees will be sworn in and take office at the next town meeting which will be held on April 19 at Town Hall located at 504 San Juan Avenue.  Congratulations and Best of Luck to all!