This Saturday, Oct. 1 you can help support the protests at the Standing Rock Sioux reservation in South Dakota by attending the rally to support their efforts in Alamosa starting at 10 a.m. Join the San Luis Valley Contingency lead by Crowfox KmimilaWi of Saguache. Attendees are being asked to be prepared for any kind of weather and to bring their own food and water to support themselves throughout the day. 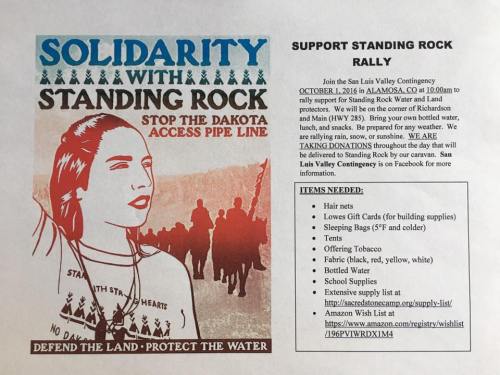 For those who may not be able to attend the rally but wish to support the cause in another way, residents are being asked to provide warm clothing for the people protesting on the front lines in South Dakota. Your donations may be dropped off BEFORE this Saturday, Oct. 1 at Saguache Works Blue Earth and Mercantile Thrift Store in downtown Saguache at 404 4th Street.

The Alamosa rally will be on the corner or Richardson and Main (Hwy 285). For more information please connect with their efforts from the San Luis Valley Contingency Facebook Page.

Honor, prayers and a drum circle were presented at the Annual Saguahce Pow Wow in support of the protest efforts in South Dakota Photo: Saguache Today.

Some Background on the situation: According to the oil companies in the throes of construction, the Dakota Access Pipeline Project is a new approximate 1,172-mile, 30-inch diameter pipeline that will transport oil from North Dakota to major refining markets “in a more direct, cost-effective, safer and environmentally responsible manner.”

In protest, a group of over 100 Native American Tribes and allied environmentalists have set up camp in and around the Standing Rock Sioux reservation in South Dakota neighboring the pipeline to protest its construction. The demonstrators argue the line would risk the pollution of the Missouri River and connected water sources and damage ancient tribal burial sites.

Recently, completion of the Dakota Access oil pipeline seemed almost inevitable. But a recent announcement from the Department of Justice, the U.S. Army and the Department of the Interior provided a ray of hope for the Native Americans, environmentalists and Midwestern landowners who oppose it as the battle rages on in the courts and on the ground.

For now, things appear to be at a standstill, but the story continues to play out day by day, if not hour by hour. Stay Tuned and Stay Informed!