Saguache Election Ballots to Be Bi-lingual in 2017

New data released earlier this month from the U.S. Census Bureau will require Saguache County to provide election ballots in Spanish in order to be in compliance with the Voting Rights Act (VRA). 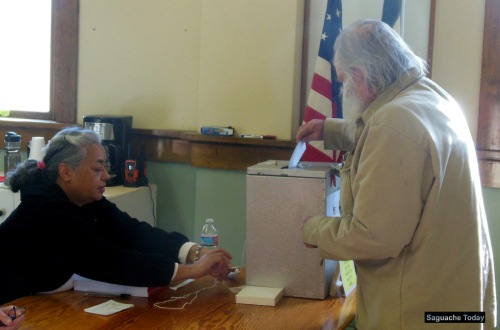 Resident Byron Smith casts his ballot in last April’s Election in Saguache. Starting in 2017, ballots for Saguache County will be avaialble in Spanish, as well as English.

The Voting Rights Act of 1965 is a landmark piece of federal legislation in the United States that prohibits racial discrimination in voting. It was signed into law by President Lyndon B. Johnson during the height of the Civil Rights Movement on August 6, 1965, and Congress later amended the Act five times to expand it.

Saguache was one of three San Luis Valley counties, the list also including Costilla and Conejos counties, which will be operating under that provision until after 2020, when the next census is conducted. Although for Costilla County it is not a change per se, as this area already operates under these VRA requirements.

On December 5, the U.S. Census Bureau released a list of 263 jurisdictions across the nation that must provide language assistance during elections for groups of citizens who are unable to speak or understand English adequately enough to participate in the electoral process. These determinations are pursuant to specifications, as amended in July 2006, in the Voting Rights Act.

The list, published in the Federal Register, identifies which jurisdictions are covered by Section 203 of the Voting Rights Act and must provide language assistance for Hispanic, American Indian and Alaska Native, and Asian language groups.

A complete list of which jurisdictions are covered, including which language minority groups are included, can be found in the Federal Register Notice.

In support of this Federal Register Notice, and as done with past publications of the Section 203 language determinations, the Census Bureau is releasing a set of public files presenting the underlying data used to construct these determinations.  This file and information about this file can be downloaded from the Census Redistricting Data program website.