Last week, Saguache Works welcomed a new administrator to its operations when it hired Andrea Sandoval to the newly created position.

“Andrea is a great addition to our team,” said founder and Saguache Works Executive Director Marge Hoglin.  “Many of you already know her, but if not, stop in and introduce yourself!”

Founded in May 2012, Saguache Works has come a long way in a short time, and with the hiring of Sandoval, the community-based nonprofit takes another big step forward. As the organization has grown this past year, Saguache Works has added new volunteers, new programs to help with food costs for low income seniors (SHED), as well as new board member Geneva Mixon.

Another marked success the nonprofit saw in 2016 was securing the purchase of the buildings it occupies , at 404-406 4th St., from Blue Earth Business Opportunities (BEBOP), a privately owned LLC.

“The purchase was made possible by years of hard work on the part of an extremely dedicated team of volunteers, ongoing community support, and financial assistance from the First Southwest Bank Community Fund,” said co-founder Marge Hoglin.

The Saguache nonprofit will turn five this year and while founder Hoglin will continue to be closely involved with the organization, she will be making room for more personal time by handing over many of the day to day operations to Sandoval.

So with hopeful sights set on tomorrow, its time to look back at Saguache Works, its humble beginnings and the hard work and dedication that have made it one of the most successful public/private partnership examples in the region.

Saguache Works: Where It All Began

If you have traveled through the San Luis Valley along Highway 285 and dared to turn off into downtown Saguache, no doubt, you’ve witnessed a renaissance of sorts in recent years. While this historic main street has enjoyed the anchor of the 4th Street Diner and a growing, organized arts community, Saguache Works has been a major force in furthering actual revitalization of downtown.

The precipice for the nonprofit was a plethora of boarded-up storefronts and abandoned downtown buildings, which had earned the town’s 4th Street business district a “Most Endangered Place” designation from Colorado Preservation.

Determined to save their town from extinction, residents rallied to the cause and launched the Saguache Downtown Revitalization Project.  Building facades were painted; new sidewalks, pavement, streetlights and benches were installed.  It was all very lovely, but jobs in the region remained scarce, the population continued to dwindle and businesses struggled to survive.

The Saguache Works story, which is a “Win-Win” for the community, began in May 2012 when Hoglin and Lindy McDaniel, two retired “old ladies,” purchased the old, and mostly vacant, buildings.

Both had been active in the Saguache Downtown Revitalization project and wanted to bring business activity back to downtown. So they formed BEBOP, invested their own personal funds and bought the property. Given the population and demographics of Saguache, they figured a public-private partnership would be necessary to make something happen. That led to establishing Saguache Works; they applied for and received their 501(c) 3 status from the IRS.

The two women spent the summer of 2012 scrubbing and painting, replacing ceilings, tearing down walls and installing new fixtures.

Finally in September 2012, their first project, The Saguache Welcome Center, Gallery & Gift Shop opened hoping to draw in travelers off Highway 285 to support local artists and other downtown businesses.  While it took some steadfast determination to make it through that first winter, their efforts paid off and by the summer of 2013 there was a noticeable shift and increase in visitors.

The BEFit Studio for exercise, dance and yoga in one of several Saguache Works programs.

By then, their ventures had grown to include the BEFIT Studio for exercise, dance and yoga, at 317 San Juan Street, as well as the Blue Earth Thrift & Mercantile. The thrift store became the anchor, providing a focus for community volunteers, a place for merchandise to be recycled and made available to low-income families, and a means to generate income for the fledgling nonprofit.

But if the programs of Saguache Works are to be referred to as the feathers of the winged wonder, then surely it is the volunteers who have became its beating heart. Ask any one of the dozens of Saguache folks who volunteer at the thrift store, exercise studio, or fiber arts cottage projects why they do it and you’ll find a common thread. It’s because of how Saguache Works has changed their community, created a central, vibrant meeting place that provides goods and services that people actually need.

The next significant success came in the summer of 2013, when Saguache Works created the 4th Street Food Store, which initially shared space with the Welcome Center and featured a limited selection of mostly local foods. Today, they will special order, can order in bulk for just 10% over wholesale cost, and now offer a variety of discounts to low-income resdients. Open seven days a week from 10 a.m. to 4 p.m., the 4th Street Food Store has – without a doubt – made a substantial improvement on the quality of life for hundreds of Saguache residents. 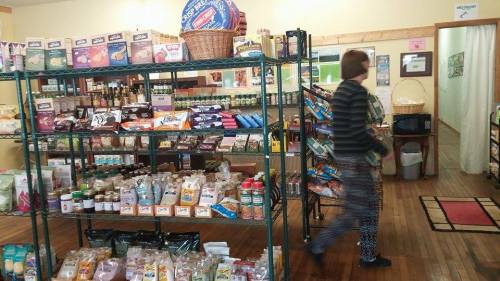 The weekly truck arrives with more food to re-stock the shelves at the 4th Street Food Store in Saguache. Photo: Lynn Nowiskee/Saguache Today.

Since its humble beginnings, Saguache Works has continued to evolve and change.  McDaniel retired in the summer of 2014 and moved away to be closer to family.  The food store has gradually expanded and serves a growing segment of the population.  The thrift store generates adequate revenue to help subsidize food prices, and lower prices are drawing more people to eat healthy.

At this point in the story, it’s important to note what really propels public/private partnerships like Saguache Works. Most successes will point to one person, who keeps the vision alive, particularly during the challenging times when others walk away. In this case, it’s the ever-humble Marge Hoglin.

Generally understated in approach and appearance, Hoglin represents the entrepreneurial drive known in business circles for getting the job done. When a project involves 100 year old buildings, small town politics and the coordination of a growing group of paid staff and volunteers, it’s not exactly what folks list among their retirement plans. But Hoglin was made for these sorts of challenges.

For those unfamiliar with her story, Hoglin began her career as a journalist, working for the “Longmont Times-Call” before starting a statewide women’s magazine in the early 1980s. After nearly a decade of publishing, Hoglin’s next venture was the unlikely call as proprietor of a bed and breakfast in Allenspark, Colo., which she ran for more than 14 years. Eventually it was the sale of Sunshine Mountain in 2007 that – unknowingly – created the seed money for Saguache Works. Hoglin’s success in two of the most challenging industries – publishing and lodging – developed the determination necessary for her next venture, waiting in the San Luis Valley.

The Saguache Works business model is working. It’s not selling a spin, or reciting irrelevant statistics. Nor does it rely completely on government subsidized grants. This nonprofit business model actually has a revenue stream – several in fact, which allow the nonprofit to achieve virtual self-sufficiency and create jobs.

One of its most successful endeavors is Homegrown Totes is a fiber arts cottage industry that now employs several part-time seamstresses, plus several interns and a team of part-time marketing professionals.

And now, with the hiring of a full-time administrator, Saguache Works stands as a model of what can be the best in public and private partnerships. And it’s just one of the ways that business is being done in Saguache Today!

If that concept interests you, community members are invited to become involved and to help shape the future of Saguache Works.  If you would like to volunteer, or to participate in any way, please call (719) 655-0216.