The Wait Is Over: Hidden Figures Playing in Saguache

Make plans to come and see the story of a team of African-American women mathematicians who served a vital role in NASA during the early years of the US space program as told in the inspring film, “Hidden Fugures” playing this weekend (February 10 – 12)  in downtown Saguache, at Cozy Castle Cinema.

“Hidden Figures” (PG) is the incredible untold story of Katherine G. Johnson, Dorothy Vaughan and Mary Jackson – brilliant African-American women working at NASA, who served as the brains behind one of the greatest operations in history: the launch of astronaut John Glenn into orbit, a stunning achievement that restored the nation’s confidence, turned around the Space Race, and galvanized the world. The visionary trio crossed all gender and race lines to inspire generations to dream big.

The Saguache  Community Players are planning their new theater season with an exciting lineup of fun and varied plays. Beginning in April they will present “The Butler Did It,” a English comedy, murder mystery. Then in late May or early June Saguache’s local school children will join in the fun as the Players present  “Alice in Wonderland.” 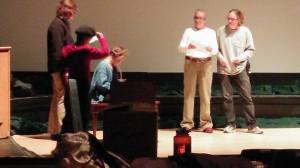 And as the summer heats up so will the group’s efforts in July as they present “Greater Tuna” an hilarious is two-man show starring Saguache locals Martin McKee and Julia Hammel.

If you – or some other theatrical type you know –  is interested in performing in any or all of these productions, please call Julia Hammel at 719-496-6528. Everyone of all ages and talents are encouraged to become a part of this exciting and dynamic theater group in Saguache Today. Break A Leg!