“This is not a moment, it is a movement,” said Mathenee Treco, cast member of the Broadway hit Hamilton. If there is one thing students from underprivileged Title One schools need more of it is to feel valued, empowered, and recognized for the unbridled potential they possess. This is exactly what the Gilder Lehrman Institute of American History and the Hamilton Broadway production highlighted during a special, student showing of the Broadway phenomenon on March 21 in Denver. Students from across Colorado came together to not only see the show of a lifetime, but to also support and prove that the youth of America are capable of anything.

​Thumbs up to great seats as student performers prep with the crew on the Hamilton stage. Photo: Emma Smith/Moffat School

The morning of the “EduHam” experience started with student performances. Of the 39 schools that attended, 14 small groups were selected to perform original pieces relating to issues and themes of the play and of the Revolutionary War; many of which apply to current social and political issues today. It was here that the crowd’s excitement and pride was felt strongest. The energy of over 2,800 students and teachers electrified the Buell Theater as student performers took stage. To be in the room where these students’ spoke their unbarred and honest truths was beyond moving. The cast and crew of Hamilton provided something underprivileged youth rarely receive, a platform to speak and a community that not only supported their voices, but also amplified them for all to hear.

Moffat School’s very own Ryker Poor and Sabian Storm were two of these voices. Prior to their performance Poor and Storm researched primary documents and key individuals during the Revolutionary War. They then worked together to explore and express important issues of oppression, equality, and themes of freedom. The end result concluded in a contemporary rap battle filled with historical references and discussion, as well as commentary that hinted to current political innuendos. Like every other student performer that day, Moffat students proved that the youth of America is aware of the success, turmoil, injustices, and movements our country has undergone to become who we are today. And as the voice of tomorrow, these students also proved that their visions for the future and their desire to make abject situations better are achievable. It was invigorating and inspiring to hear young adults from challenging circumstances rise above their situations and define their own destinies.

​Students Alexandria Harrison and Holly Fuller get autographs from Mathenee Treco who plays Hercules Mulligan and James Madison in Hamilton. Treco, an immigrant from the Bahamas, grew up and graduated in Aurora, Colorado. Photo: Emma Smith/Moffat School

After the student performances and a brief lunch break, students and teachers alike were seated in anticipation. After months of hard work and hours of research, the moment had arrived. The diverse and impressionable crowd watched in awe as the play began. Throughout the show students cheered, laughed, and cried as they watched the protagonist, Alexander Hamilton, rise above paralleled life themes of poverty and oppression to become a force to be reckoned with. The pride and potential this immigrant Founding Father had and all he achieved was the very reason so many students related to the story. Despite the constant obstacles he faced, Hamilton continued to push himself and write his way out of destitution and into a life of greatness.

For these students, future leaders, and unshakable voices of hope the Hamilton experience proved to be more than just a memory they would cherish forever. It was a podium they were able to express themselves on. It was a celebration of inclusion and a realization of the power our diversity holds. It was the honest discovery that where we come from does not define our worth or where we are going. Most importantly, it was the beginning of something great for every student in attendance; it was the recognition that they hold value as the youth of America, as artists, and as human beings. Their lives matter. Their voices matter. They matter and I can guarantee, they are not throwing away their shot.

In addition, I offer a most sincere thank you to the Gilder Leherman Insitute, and the cast and crew of Hamilton, for providing this incredible opportunity to the impoverished and overlooked students who do not normally get chances like these ($10 tickets wow!). Deep gratitude also goes out to the Saguache County Commissioners for awarding Tax Grant funding for this educational trip.  Also, thank you to the devoted, selfless teachers who work so hard for their students and make experiences like this possible. You are advocates of acceptance, voice, and of the youth; and you are appreciated. 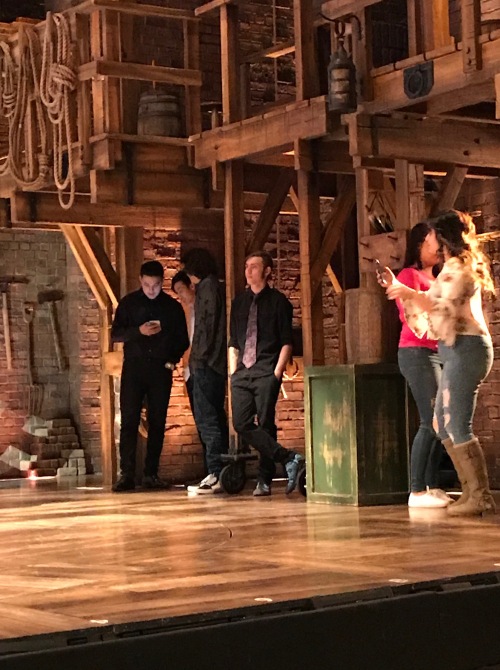