Some say that when the winds blow in the San Luis Valley, you can hear the beat of ancient ceremonial drums from the Native Americans who inhabited this land for centuries.  However, should you hear them this Saturday, August 25 they may very well be coming from the Annual Traditional Intertribal Pow-Wow in Saguache.

Many Nations, One Community of Indian drummers, singers and dancers will gather at Otto Mears Park in Saguache for this day-long celebration of all things Native American.  The park opens at 9 a.m. and the event is free and open to the public.

As has been tradition, the master of ceremony will kick off the celebration with the Grand Entry scheduled for 11 a.m., followed by traditional drum music and festive dancing for all. The evening culminates a Pot Luck Honor Meal with friends and neighbors sharing their favorite side dish to compliment the main feast, usually donated by a local farmer or rancher from the San Luis Valley.

According to a blog by Crowfox KmimilaWi: This Pow-Wow began as a dream many years ago. It was created to be a heritage learning experience by a Native American Community member for her dancing for her children.  Her dream was to keep indigenous heritage alive in the community while instilling pride in her children as they learned about Regalia and dancing. 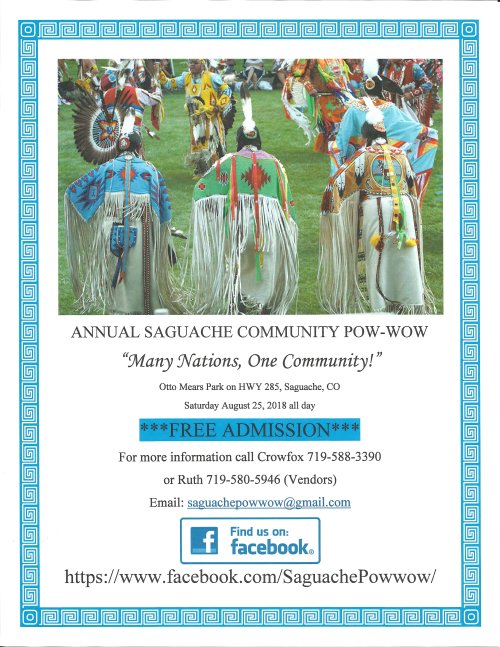 It has been more than 20 years since those pow-wows, today community members work to continue that dream on a larger scale. This pow-wow is unique in that it focuses on the non-competitive origins of this tradition. This is one of the more spiritual pow-wows in the area.

While the central focus of Saturday’s celebration is Native American culture and traditions, there is also a fair surrounding Otto Mears Park with everything from food vendors to arts and crafts, with Native American specialties being the focus.

Some back ground . . . Saguache and the entire San Luis Valley was known as the land of the Ute Indians, but the area was also known to 12 different Indian tribes, including the Navajo, Apache, and Comanche, who came to trade, hunt, and raid.

Eventually, the Utes made a treaty of peace with the United States in 1849, shortly after the Mexican War. Afterward settlers from New Mexico established several small communities in what is now Colorado and in 1868 the Utes were removed to a reservation in western Colorado. They continued to play a role in Saguache in the northwestern corner of the valley from the Los Pinos Agency to the west of Saguache until they lost their expansive reservation as the result of the Meeker massacre in 1879.

For more details, you may connect with the group on the Annual Saguache Pow-Wow Facebook Page. Otto Mears Park is located between Christy and Pitkin Avenues just off on Highway 285 in Saguache, CO. 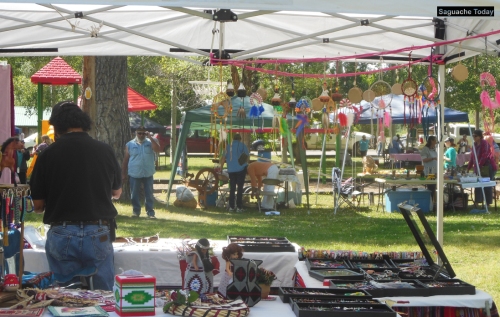 A popular event among area vendors, the Saguache Pow-Wow offers everything from food, to jewelry to art, many with a Native American theme. Photo: Saguache Today