According to the most recent hiking use report released last month (July 2018) by the Colorado Fourteeners Initiative (CFI), last year an estimated 334,000 people hiked a 14,000-foot peak in Colorado during the primary hiking season

This total represents an overall increase of roughly 23,000 person days compared to CFI’s estimate of 311,000 hiker use days for 2016. The increase stems from both more accurate use estimates on the highest-use 14ers, as well as year-over-year increases of 7 percent on several peaks with a multi-year history of reliable data collection. 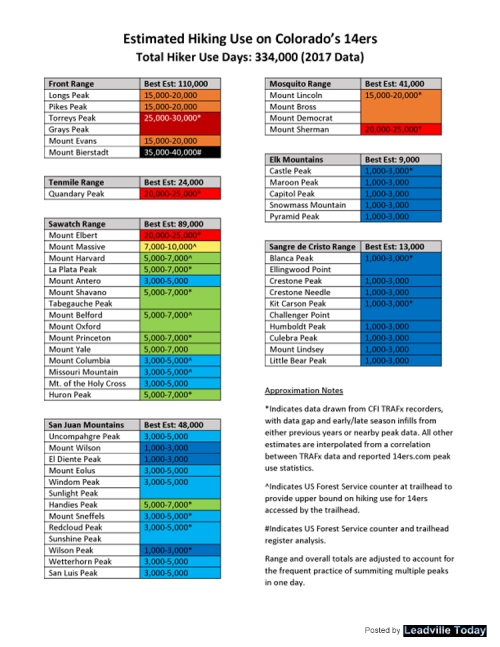 “Colorado’s Fourteeners continue to be some of the most popular mountain hiking and climbing destinations in the country—particularly those peaks located closest to Denver,” said Lloyd F. Athearn, executive director of CFI. “More than 55 percent of all 14er hiking use statewide occurs on the 11 peaks closest to the Front Range population centers, while almost one-third of use is concentrated on just 6 peaks. Since 2015 hiking use has grown around 7 percent on 14ers with the most reliable history of data collection.”

The most popular 14er in the state is Mount Bierstadt, which had a projected 39,000 hiker use days in 2017 based on counts provided by the US Forest Service. The busiest single day last season on Bierstadt was July 18, which saw a whopping 1,382 hikers attempt the peak.

In second place was Grays and Torreys Peaks, the two 14ers that straddle the Continental Divide just south of I-70, which are generally climbed together using a single trail. CFI estimates that almost 28,500 people climbed the route last year.

The silver lining for those peaks nearest to Saguache Today, is that they see less hikers. Of course, the San Juans to the west see more users as a range that includes 13 peaks over 14,000 feet. While the Sangre de Cristo Range gets less use, with Blanca Peak topping the list for hikers.

“With each passing year our confidence in the hiker use estimates increases,” added Athearn. “We have improved the number and placement of CFI trail counters, optimized data collection techniques to reduce data gaps and located additional data sets from third parties. The net effect is that estimates of hiker traffic on 32 peaks is based principally on some form of field monitoring. CFI’s multi-factor modeling program estimates hiking use on the remaining 22 peaks.”

Forest Service data collected on Mount Bierstadt showed that actual hiking use was far higher than projected by CFI using data from a 2012 study and adjusting based on observed increases at other highuse 14er locations. Bierstadt alone represents 11.7 percent of 14er hiking use statewide.

The trail counter location used in 2015 and 2016 on Mount Elbert’s East Ridge route showed spikes in hiking use that exceeded the number of hikers on the more commonly used Northeast Ridge route that is accessed by a much easier road and has a much larger parking lot. Moving the counter in 2017 to a more optimal location resulted in much lower hiker counts. The first East Elbert location likely suffered from false counts due to vegetation triggering the counter when it was warmed by the sun and blown by the wind. 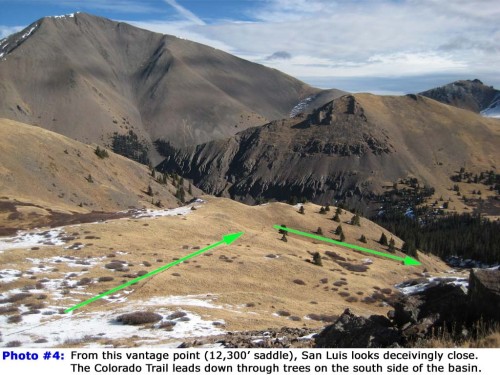 The San Luis Peak Backcountry Project took place this summers and involved some much needed trail work to this 14ers passageway. Photo: 14ers.com

While the location of the Mount Sherman trail counter did not change between 2016 and 2017, CFI staff more clearly delineated the trail as it passed by the counter. Multiple social trails in 2016 likely resulted in many climbers not passing by the counter’s infrared sensor, thereby reducing the estimated number of climbers.

“Hiking use on the 14ers seems to be increasing at about seven percent per year at several reliable, multiyear data collection locations,” said Athearn. “Colorado is in the top 10 of fastest growing states with a population growth of 1.7% annually between 2015 and 2017. However, in-migration was highest for those aged 24-32, the prime age for fit, outdoor-oriented people to be exploring Colorado’s high peaks.”

Counter locations used to establish the longer term growth rate include Mounts Democrat, Elbert (North Ridge and Black Cloud), and Shavano, as well as La Plata, Huron, Redcloud/Sunshine, Wilson and Blanca Peaks. CFI’s estimate of hiking use suggests a statewide economic impact of more than $90 million directly attributable to hiking 14ers based on economic expenditure studies performed by Colorado State University economists John Loomis and Catherine Keske. Their 2009 study found that climbers of Quandary Peak near Breckenridge spent an average of $271.17 per day for gasoline, food, lodging, equipment and other retail purchases.i

“14er hiking use is a significant and growing source of economic development for Colorado and many of its trailhead communities across the state,” said Athearn. “The challenge is building out and maintaining the network of sustainably designed, durably constructed summit hiking trails—CFI’s top priority—before hiking use impacts make this harder and more expensive to do. If we can provide a robust network of 14er hiking trails that protects the fragile alpine tundra ecosystems through which these trails pass we can protect these signature Colorado peaks while helping foster this source of hiker-generated revenue for years to come. However, use on some peaks is literally mushrooming and may be exceeding CFI’s ability to build sustainable summit trails.”

CFI’s hiking use projections are based on the combination of several data sources.

About Colorado Fourteeners Initiative. CFI was founded in 1994 to preserve and protect the natural integrity of Colorado’s 14,000-foot peaks through active stewardship and public education. To date CFI has constructed 31 sustainably designed, durably built summit trails on 28 14er peaks. CFI has engaged almost 15,500 days of volunteer stewardship since 2001 in the construction and maintenance of these peaks. A multi-pronged educational strategy has contacted more than 127,000 hikers in the field through paid crews and volunteer Peak Stewards, while CFI’s YouTube channel contains more than 40 educational videos that have been viewed more than 43,500 times. Learn more at http://www.14ers.org and obtain frequent updates on Facebook.